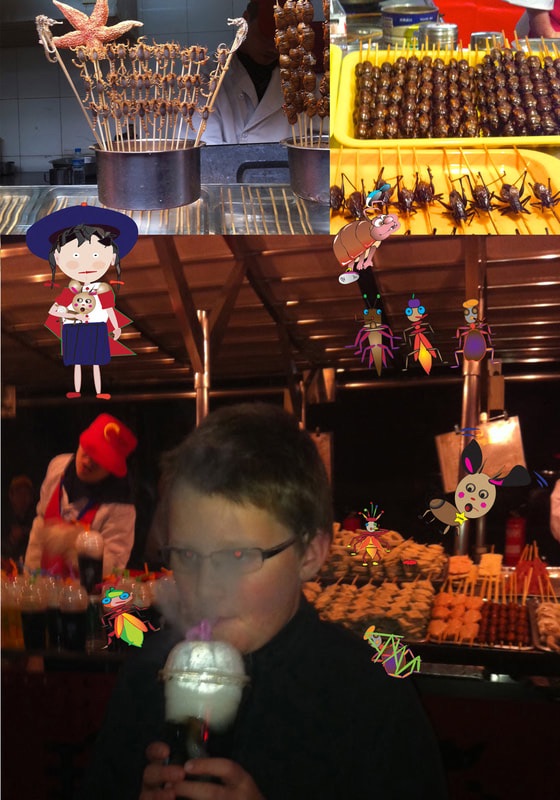 The Final Chapter
of Tobogganing the Great Wall of China

Abby and Alex were back in their apartment in Beijing. It was dark. They were completely wiped out from their long trip to the Great Wall. The tired, siblings were happy that the unexpected excitement of the day was behind them.

“Abby,” Mom called from the living room, “it’s time for you to get your jammies on.”

“Okay Mom,” Abby said. She dumped her backpack onto Alex’s floor and ran to her own room. Finn happily bounded behind her across the floor to his bed. Abby knew that tomorrow she would have to explain why Finn was here. She knew dad was very upset with her. Hopefully, MeiMei and her grandma would be able to help her out by taking Finn for the rest of their trip. For now, she was too tired to think about it.

Abby quickly packed her suitcase. She laid out her favourite blue shorts and a pink, Savannah T-shirt for the morning. She wanted to be ready when dad called her. She wanted to be on his good side after the shock she had caused him at the Great Wall.  Abby had saved a few bits of food from lunch for Finn. She put Finn in the suitcase after arranging some blankets into a cocoon shape for him. She added the scraps of chicken and rice to this heap so the little guy wouldn't starve. Completely worn out, Abby was happy to crawl into her bed. She scurried down under the covers and fell sound asleep.
​
Pintsize, finally feeling like he was safe, realized he was not on Finn anymore. He was on the floor in Alex’s room again. He must have fallen from Finn’s fur. Thinking he was dreaming, the little mite was surprised to hear a familiar voice.

“Pintsize! Buddy! Is that you?”

“DYNO? I can’t believe my eyes. How did you get here?” Pintsize asked.

“Oh boy! Have you got a lot to learn!” Pintsize exclaimed. “Quick, crawl into Alex’s backpack so we’re safe. I’ll tell you all about it.”

Dyno Mite followed his friends advise and crawled into the backpack.

The two, tiny bugs were just in time. Alex quickly appeared and pulled the backpack straps over his shoulders. He headed out the door with his dad.

It was dark now. Alex and his dad were walking along a dimly lit street in the main downtown area of Beijing. As they headed towards the bright lights and food stalls that lined Wangfujing Street, Alex seemed to get his energy again. The DongHuaMen Night Market was an attraction both he and dad were eager to visit. Everywhere they looked the two tourists noticed vendors with carts. Some sold chicken feet to eat while others sold buns filled with pork and steaming drinks. Many of the aromas Alex had difficulty identifying. He was overwhelmed by the traffic sounds and by the shoving and pushing of the crowds. He tried hard to stay by dad's side in the surging crowds. Alex saw cages with live piglets and ducks in them. He also noticed some of the same things he had seen at the other market places in Beijing. There were brightly painted dragons, beautifully decorated fans, electronics of every kind, lots of fabrics, fresh fruit and vegetables and tons of smelly, fresh fish for sale. Cars, wagons and scooters weaved in and out of any available space and horns honked continually. Drying clothes hung pinned to ropes stretched across balconies of the apartments above the shops. Alex and his dad, being Americans, stood out as targets for everyone and anyone trying to sell tickets to tourist attractions. And dad had warned Alex not to get caught up in any conversations. Not that Alex would, since his knowledge of Mandarin was limited to only a few phrases. He felt his head spinning as he watched and listened to the sights and sounds evolving from the circus atmosphere of the night market.

Pintsize and Dyno were bouncing up and down in Alex’s backpack. Pintsize explained to his bug buddy about how he had come to be in China. Pinty told Dyno the scary story of the suitcase horror on the plane. “I can’t believe you didn’t feel all that thumping around,” he said to his old friend, Dyno.

Dyno just shrugged and said, “Sorry I missed it. Sure sounds like one thrilling adventure!”

Pintsize hesitated to tell Dyno about the tobogganing disaster. Dyno would probably think he was a big baby. He had always looked up to Dyno, ever since that race in Bedbug Park. Even though Pintsize had beat Dyno by a nose, he knew how tough his friend really was. Dyno had had an unsettled home life and that had made him strong and determined. So instead of explaining the day's events now, he'd save that adventure for another telling. Instead, Pinty explained how they had arrived in China in Alex and Abby’s suitcases.

“Cool, dude! That’s an amazing tale!” Dyno, who loved adventure, shouted. “You mean I’m really in China?” He crawled to the top of the backpack so he could see some sights for himself.

“Be careful!” Pintsize warned. He hesitantly crawled up beside Dyno and grabbed one leg. “Don’t fall out. You’ll never get back home. My human family leaves tomorrow for Shanghai.”

“Hey!” Dyno screamed. For the first time his voice held a hint of fear. “Those look like bugs Alex is eating!”

Pintsize looked where Dyno was pointing. In one hand ​Alex was holding a drink - which was steaming fiercely -  and in his other hand, he held what looked very much like fried bugs on a stick. He noticed Dyno blink his eyes in shock  and then take another covert look.

“Yuk!” said Pintsize. He watched Alex licking his fingers in obvious pleasure. “Those crisp, roasted bugs could have been our friends.”

Alex needs to just “make a dash for the trash" with that thing,” Dyno said, shivering. “Why would humans want to bite into bugs?”

“Well,” Pintsize said, his loyalty to his family fighting with the queasiness he felt in his tummy, “I guess they’d think what we eat is pretty gross too…. I guess they might want to get even? I mean…a bite for a bite? It’s only fair I guess.”

Pintsize thought about it for another moment but gave up his efforts to defend Alex. “Yeah it really is kind of disgusting.”

Out on the street, Dad said to Alex, “Okay buddy, it’s time to get back to our hotel and pack up for our trip to Shanghai tomorrow.”

Back in their Beijing apartment, Alex barely made it into bed before he fell asleep. He would have to get up early in the morning to pack. The family was riding the bullet train to Shanghai. Alex had read that the bullet train* moved at speeds that made grown men dizzy. He couldn’t wait. He wanted to experience this thrill for himself.


….to be continued in the next book: “The Adventure of Pintsize Plasma – Lost at the Pirate Caves”


And by the way, in case you were wondering, the largest country in the world is Russia.