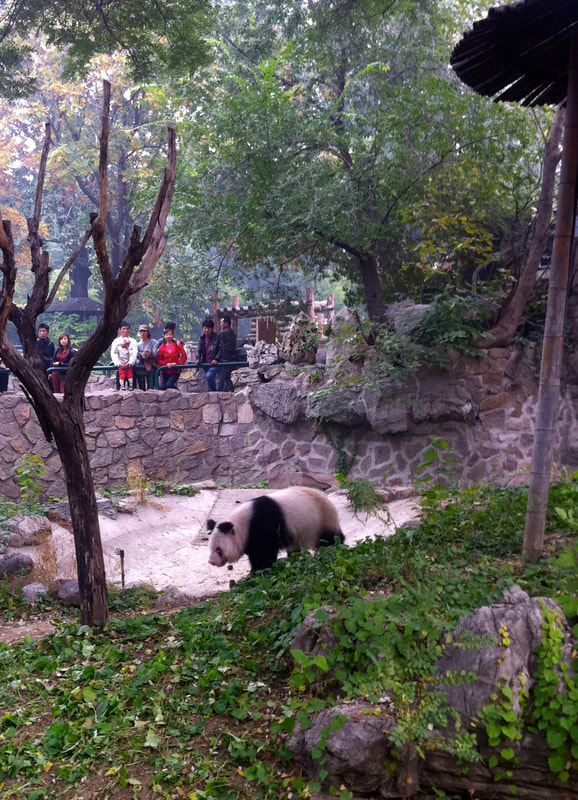 On to the Great Wall
​Chapter 7

Pintsize breathed a sigh of relief as he scrunched himself farther down into Finn’s fur in the backpack. “What will this day bring?” he thought. After the trouble he had gotten himself into already, the poor little guy wasn’t sure what else might happen.

Alex and Abby hurried out the door anxious to get going on this new adventure. They were in a mad rush to be first to the bus to get the window seat and have the best view.

“This is one crazy bumpy ride,” Pintsize said to himself, from his hiding place.

The bus careened along the highway. The driver swung recklessly in and out of traffic, all the time honking his horn for other drivers to get out of his way. After a couple of stops along the bus route to see a few other sights, they were soon approaching the main event of the day. Alex was watching all the cars and scooters weaving in and out of traffic. No one seemed to be following the rules. He was beginning to wonder how anybody ever got to their destinations.

“Mom, is that the Great Wall way up on top of that mountain?” Alex asked excitedly. He could see a massive stone structure from the window of the bus.
Mom looked past Grammy and out the window to see where Alex was pointing. “It sure is. I can’t wait to take some pictures of all of you up there.” Mom said.
“But how do we get up to the wall,” Alex asked. “The bus is stopping down at the bottom of the mountain. I don’t see a road going up.”

“We’ll be taking a chairlift up over the trees,” Dad said. “We’ll have a fantastic view of the Great Wall and the valley from the chairlift.”

“Do we come back down on the chairlift too?” Abby asked, a little nervous about being that high up in the air.

“No, we’ll be taking a toboggan down the mountain,” Mom said, with some excitement and a little hesitation in her voice. “Are you okay, Abby?” she asked. “You look a little nervous.”

“I’m just fine with it,” Abby said defensively. “But I’m going to be sitting with Dad on the way back down.”

“We’ll see honey,” Mom added, smiling at the authoritative tone in her daughter’s voice. “I think the toboggans only hold one person. We’ll check when we get there. Let’s just enjoy our walk on the Wall.” Mom smiled at her kids. “It’s going to be an adventure you’ll remember forever. You can take the pictures back to school for ‘Show and Tell’.”

“Did I hear someone say a toboggan?” Pintsize shivered with fear. Pintsize could almost hear his dad talking to him.
“Half-pint…” (that was his dad’s nickname for him) remember what I told you to do when you are frightened?” Dad’s voice boomed in his head. “Take a big breath and remember how strong you are. You showed me how tough you can be by practicing everyday for the race at Bedbug Park. That toughness won you the race against Dyno Mite. He was your strongest opponent. If you stay tough, you will know you can survive.”
His dad’s voice was soothing to his shattered nerves.
“I can survive. I will survive…I can survive. I will survive,” Pintsize repeated to himself. Then he knew he would be okay. “I want Dad to be proud of me.”

The view from the chairlift was amazing. Pintsize had crawled up to the top of Finn’s head so he could see better. “The people look like little bugs,” Pintsize thought.

As the excited travellers came closer to the Great Wall, Alex asked in amazement, “How long is that wall? It looks like it goes on forever?”

“The Great Wall twists and turns through China for about 8,800 kilometres,” mom said looking at a pamphlet in her hand.
“Yikes! That’s like hiking over mountains and rivers from the Atlantic to the Pacific Ocean and back again.” Alex grinned
“Don’t worry. We aren’t going to walk that far,” mom said smiling. “The bus will be back in a couple of hours. We need to be back down the mountain by then.

“Alex asked, “Why would they build such a gigantic wall?”

“A long time ago the Chinese people had enemies called the Huns. They built the wall to keep their families safe from attacks by these wanderers,” Mom said
.
“Cool,” exclaimed Alex, racing up the cobblestone steps worn smooth by centuries of horses’ hooves and soldiers’ boots. He could image bravely battling the enemy with swords and bows and arrow.

“Look! Is that a fortress up those stairs?” Alex yelled, taking two steps at a time and trying to be the first to the top. “This is fantastic! Dad, there’s a ladder inside this fort. Can we climb up? We can search the skyline and pretend we’re looking for enemies!”  Alex loved to play detective. He often liked to watch people in the neighbourhood. He’d write clues in a notebook while trying to guess what crime they had committed.
to be continued......................
​