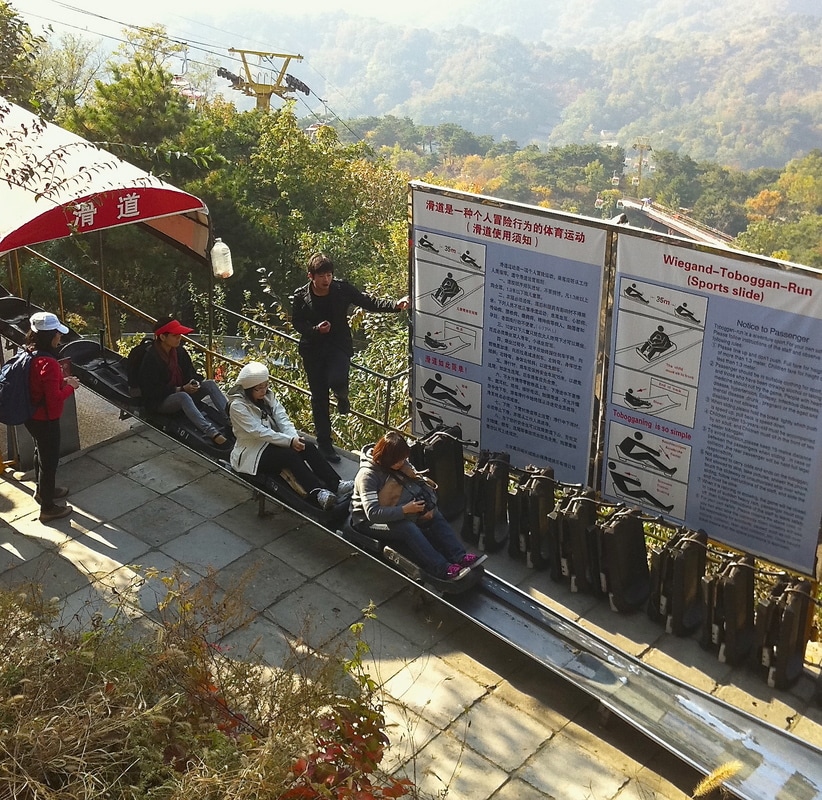 Danger at the Toboggan Raceway
​Chapter 9 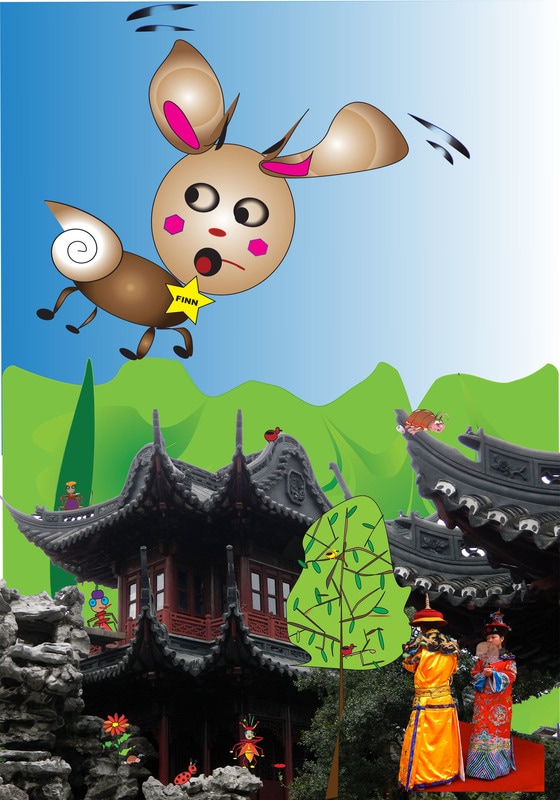 ​     Abby skipped down the worn, stone steps of the Great Wall.

Pintsize hung tightly to Finn’s fur in Abby's backpack. She passed tourists taking pictures of the beautiful scenery. With each step, Finn seemed to slip farther out of Abby’s backpack. Petrified, Pintsize looked nervously around and held on tightly. Worried, Pinty held his breath. He wished he hadn’t moved to the top of Finn’s head to snoop around. He tried to calm himself down the way his dad had explained. Realizing that his curiosity had gotten him into trouble again, the frightened little mite thought of his Mom. Mom had a magic way of comforting him in troubling times just by being near.

Abby’s dad was able to explain to the toboggan manager that his young daughter wanted to ride with him.
“She pretty little,” the manager said in broken English. “She sit behind you,” the toboggan operator said, smiling and nodding his head.

As they started out, Abby thought about how happy she was that Dad was behind Mom’s toboggan. Mom was always cautious, so Abby’s ride with Dad would be less dangerous too.

Alex was being reckless. He had figured out how to make his toboggan race to the very, top edge of the slide’s uppermost curve. Suddenly, at the very last possible moment, Alex would bring the slide back under control. Then, once again, he would speed to the top almost propelling himself into space.

Pintsize was terrified. He though this crazy ride would never end. Finn was being tossed around dangerously in the backpack. When the toboggan hit a bump, Finn got jolted closer to the top.

Abby wrenched to the right to see what Alex was doing. It was too much movement. The backpack suddenly shifted.

In a heartbeat…it was over!

Pintsize was soaring through the air like a rocket. He held desperately to Finn’s fur. “Stop!” Pintsize screamed, “Dad, help me!” he squealed. But he knew that Dad wasn’t there. He knew that no one else could hear him. He held his breath and feared what might  come next…

“Dad!” screamed Abby. “Something just flew out of my backpack!”

Abby was shocked and horrified. She knew she was in real trouble this time. Dad’s toboggan crashed into the rubber tire at the bottom of the slide. It jerked back hard and rebounded up the slide before  jamming back down to rest at the bottom.

Abby’s lower lip turned up and out in a trembling pout. Tears blurred her vision before sweeping over her white cheeks. “I’m not leaving without Finn!” she said, her voice quivering.

“Finn!” Dad shouted. He looked at Abby with shock and disbelief.

Abby was so afraid that Finn would be hurt that she forgot about being afraid. “I’m sorry, Daddy. I knew I’d miss him. He was in my suitcase.” The sad little girl just wanted to cuddle her puppy back in her arms. Tears continued to spill  over her pretty cheeks.

Dad was trying to contain his feelings. He wanted to console his little girl. Part of him was amused by her spunk, and part of him was concerned for the puppy. But another part was worried about explaining a dog to the authorities.
Dad had read that dogs weren’t always welcome as pets in China. If Finn did survive and the wrong people got him…….. Dad didn’t want to think about it. But, right now, he just wanted to find out what happened to the little guy. He knew everyone thought Finn was a sweet, playful, little pup. The whole family would be sad if he was lost forever.

Time was running out before the bus had to leave. If that happened the family wouldn’t have a way back to their hotel. They’d have to find other transportation. That wouldn’t be easy.

Afraid the puppy probably couldn’t have survived such a long fall; Dad was expecting the worst. He knew, if he didn’t find Finn, Abby would be inconsolable.